If I could give a one-word definition for polka dots it would be the word fun. I have owned a good number of polka dot fashions over the years including a 1950s-style dress, a sheer sleeveless top, several pairs of casual shorts, and swimsuits in a variety of colors. Even my Pomeranian, Emma, loves to make a statement in polka dots! 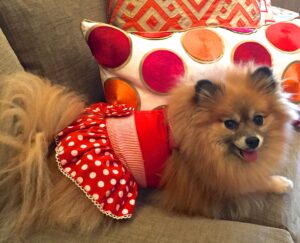 I am also a sucker for accessories of all kinds covered in these fun little dots. The last time my incredibly stylish mother-in-law came for a visit, she sported the most playful polka dot sunglasses I have ever seen. They were definitely FUN and something to add to my list of must-haves!

As popular as polka dots have been over the years, there was a time when this pattern of perfectly spaced circular spots was actually considered taboo. It was during the medieval times in Europe when it was impossible to space dots evenly as clothing was made without machines. Unevenly spaced dots brought to mind diseases such as smallpox, leprosy, boils, and the bubonic plague, so dotted patterns were never worn at that time.

The term “polka dot” originated from the enthusiasm for polka music and with it, the polka dance that swept through Europe between the 1840s and 1860s. This lively dance that started in Bohemia is performed by couples with three steps and a hop. The dance became so popular that Europe gave the craze its own word polkamania.

In 1830, Louis Antoine Godey of Philadelphia published Godey’s Lady Book. It was the most widely circulated magazine during the time before the Civil War and was designed to entertain, inform, and educate American women.

The magazine was the first to print the term “polka dot” in an 1857 description of a “scarf of muslin, for light summer wear, surrounded by a scalloped edge, embroidered in rows of round polka dots.”

The enthusiasm for polka dots continued and became even more popular during the 1950s. Movie stars like Elizabeth Taylor, Marilyn Monroe, and Jane Russell made it fashionable for women to wear polka dots which are often associated today with this innocent, carefree, and prosperous decade.

While I was antiquing in Arkansas recently, I found a couple of very fun polka dot vintage clip earrings from the 1950s that I repurposed into adjustable rings. The red piece was stamped WEISS, a jewelry designer from New York whose standard of craftsmanship was exceptionally high.

In 1960, American pop recording artist Brian Hyland scored his first and biggest hit single at the young age of 16. The name of his single was “Itsy Bitsy Teenie Weenie Yellow Polka Dot Bikini.” It reached #1 on the Billboard Hot 100 and sold nearly a million copies in the first two months of its release!

Appropriate beachwear for women at that time was a modest, one-piece swimsuit. Bikinis were still considered too risqué to be mainstream. But the new hit song prompted a sudden rise in bikini sales – most likely, those with a polka dot pattern!

Here is a black enamel Trifari pin from that era with a white polka dot center:

Polka dots continued to be used in the fashion industry throughout each decade thereafter. During the 1970s, designers took ideas from previous decades such as the polka dot pattern and combined them in new ways. The ’80s was an optimistic decade that incorporated the happy polka dot pattern into countless styles of clothing and accessories.

The pattern has never gone out of style and can still easily be found today. In fact, just last week I went to pick up my “gift with purchase” from a cosmetic counter and received a very nice hot pink tote lined with – you guessed it – polka dots!

The next time you feel the need to dress in something fun, just find something to wear covered with polka dots. I know exactly who to ask to find the perfect pair of fun sunglasses.