There is something very special about finding perfectly clear, flawless rhinestones in a jewelry setting that have withstood the test of time and many years of wear. Usually, there is at least a slight bit of yellowing or darkening that has occurred by the time 60 years or more have rolled by!

I recently experienced one of those special moments when I found a pair of some of the most incredibly stunning rhinestone clip earrings I have ever seen. They were from the 1940s era. I knew they had to have been made by a very reputable company. They were absolutely dazzling!

When I flipped one of the earrings over, I noticed that it was, in fact, signed. The name inscribed on the clip was Barclay. It was a name I had never seen or heard, so I couldn’t wait to do a little research to find out their history…

Barclay Jewelry Inc. began as the New England Glasswork Co. in 1911 in the city of Providence, Rhode Island. In 1938, it became Rice-Weiner Co., owned by Alvin and Robert Rice. Louis Mark, who had an eye for detail, was their head designer during the 1940s. They manufactured costume jewelry which was known for the high quality of design and materials used. The pieces were all handset using a variety of colorful rhinestones.

In 1946, the company split into two companies. One company stamped their two lines of jewelry using the names Jeray and American Beauty Pearls. The other was formed by Louis Mark, along with Alvin and Robert Rice, stamping their jewelry with the name BARCLAY (not to be confused with McClelland Barclay). Mark continued to work as head designer for this new company Barclay Jewelry Inc.

The price of Barclay jewelry ranged from average to quite expensive, depending on the design. Many of their pieces were sold through Marshall Field’s department stores which, years later in 2005, became Macy’s. Here is a similar pair of Barclay clip earrings in a circular design:

The company was only in existence until 1957, so most of Barclay’s jewelry reflected post-war retro designs.

BARCLAY was the mark they first began using on their jewelry:

A copyright symbol was added before 1955 to protect their brand. In 1948, BARCLAY ART IN JEWELRY stamped on an artist’s pallet was sometimes used. After 1953, their pieces were marked PELTANIUM. They did not mark their jewelry at all during the last few years of production.

Now I know why these stunning clip earrings never lost their brilliance. They are signed with a name representing the kind of quality rarely found – the kind that can withstand the test of time and still keep their incredible sparkle.

Let this be a good life lesson…as you go through trials and hardships in life, be sure to keep that beautiful sparkle inside of you! 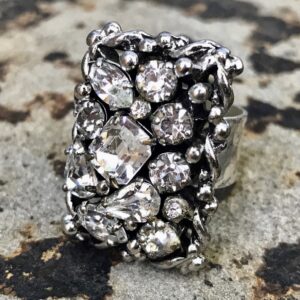