It was 1892, the beginning of a decade that would be known as the Gay Nineties. The suffragette movement was in full swing with New Zealand being the first self-governing country to grant all women the right to vote. There were witty plays written by one of London’s most popular playwrights, Oscar Wilde. Aubrey Beardsley had his controversial, decadent art which contributed significantly to the style of Art Nouveau. New inventions such as electric lights were replacing candles and gas lamps. And ragtime, referred to as “jig piano” or “piano thumping,” was the hottest music of that time.

The term Gay Nineties sounds like it would have been quite a cheerful decade. But in reality, the U.S. was experiencing very little prosperity. An economic crisis developed, worsening even more when the Panic of 1893 set off a widespread economic depression that lasted until 1896. As a result of the panic, stock prices declined, 500 banks closed, 15,000 businesses failed, and many farms had to quit operations. The unemployment rate hit a whopping 35% in New York.

Despite it all, 1892 was also the year Emanuel Ciner (pronounced See-ner) decided to start a company in New York City, manufacturing fine jewelry made of precious gems and metals. He transitioned his company in 1931 to produce high-quality costume jewelry which was quite fashionable at the time, especially with the arrival of American department stores. It was sold in Macy’s, making it available to the middle class, and also through upscale retailers such as Neiman Marcus as well as various boutiques.

Although the jewelry was simply costume, Ciner produced some of the finest quality necklaces, bracelets, earrings, and pins. He incorporated rich enameling, turquoise seed pearls, Swarovski crystals from Austria, and faux pearls made by Japanese artists which were coated with a glaze to give them the glow of cultured pearls. Everything was handmade by very skilled craftsmen.

Here is a pair of Ciner clip earrings from the 1980s with tiny rhinestones that has the look of diamonds set in gold and a bright red cabochon center:

According to an article in the New York Times in 1992, celebrities such as Elizabeth Taylor wore costume Ciner jewelry as it was made to resemble fine jewelry with precious stones. It is said she once bought $20,000 of Ciner jewelry in one day!

Elizabeth Taylor in a studio publicity photo in 1953

Although some collectors believe that Ciner did not begin signing their jewelry until after World War II, the jewelry was always marked CINER or CINER with a copyright symbol after 1955. Other marks included MC or CINER STERLING. CINER with a registered trademark symbol was used in the 1980s and ’90s.

Emanuel Ciner passed away in 1958. His granddaughter, Pat Ciner Hill, along with her husband, took over the company 20 years later. It has continued to be extremely successful.

Ciner jewelry is of exceptional quality and is highly prized by collectors today.

No matter how bleak the new year ahead might look for you, know there is hope. Emanuel Ciner was able to make 1892 not only a great year but also the beginning of a cheerful and promising decade…one that he could definitely look back on later in life and call the Gay Nineties. 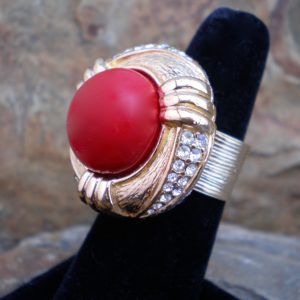