When I hear the word “Avon,” it suddenly brings back a flood of memories from the 1970s. I can still hear the doorbell ringing and after racing my sister to open the front door, I can also still see that nicely dressed woman standing there with a basket filled with beauty samples. As a little girl, I especially loved receiving the wonderfully fragranced mini-perfume samples from her.

Years later, as I have begun collecting vintage costume jewelry, I have noticed several pieces for sale with the Avon mark. Although I do not remember the Avon lady at my door ever having any jewelry samples in her basket, it must have sold well as it is now quite easy to find at almost any flea market, estate sale, or vintage jewelry show.

After recently buying a few Avon pieces to repurpose, I became interested in finding out the history of how this company got started and also learning their success story of becoming a household name.

David Hall McConnell was born to James and Isabel (Hall) McConnell on July 18, 1858. They had emigrated from County Cavan, Ireland in 1845 and settled in Oswego, New York. James became a farmer and brick manufacturer. David had planned to be a mathematics teacher, but in 1879 he ended up as a book salesman instead.

McConnell had difficulty making enough income selling books, so he began offering free samples of perfume which he concocted himself in his home. It wasn’t long before he noticed that the housewives listening to his sales pitch were more interested in buying the perfumes than the books.

McConnell figured that if books could be sold door-to-door, he could sell his perfumes the same way. His perfume business grew and grew until he had to quit selling books and focus entirely on perfume sales.

At age 28, McConnell set up a small, 500 square-foot manufacturing and shipping office in New York. He decided to call his business the California Perfume Company (CPC), named after the great abundance of flowers in that state. McConnell’s perfume line was called “Little Dot Perfume Set.”  It was made up of five single-note scents including White Rose, Violet, Lily of the Valley, Heliotrope, and Hyacinth.

An Opportunity for Women

McConnell needed help with sales, so he offered an opportunity, unheard of at that time, for women to go into business for themselves. He believed women not only had a passion for his products but also had a natural ability to network with other women. During the late 1800s, if women did work they were mainly housekeepers or laborers in factories and on farms. So this became an exciting, hopeful opportunity for them. 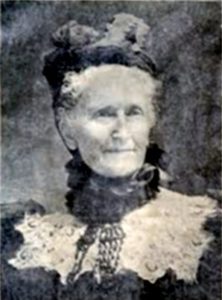 She was 50 years old when she began selling perfumes, traveling by horse and buggy or by train to sell door-to-door throughout the Northeast region of the U.S.

Within the first six months, Albee had a solid base of 100 salespeople and their customers. After 12 years, she had recruited and trained approximately 5,000 representatives and is credited with designing the company’s system for product distribution.

Businessman Alexander D. Henderson joined the company as Vice President and Treasurer in 1894 to assist in its growth. Three years later, McConnell built a 3,000 square-foot laboratory in Suffern, New York. Along with it, the first illustrated color catalog was issued. By 1902, CPC had 10,000 sales reps.

McConnell’s business plan was to have a line of products that would need to be consistently reordered and sold directly to the consumer. In 1928, he introduced the first non-perfume products which included a toothbrush, talcum powder, and vanity set under the name of Avon.

McConnell came up with this name for his products after being captivated by the beauty of the countryside in Stratford-upon-Avon, England. This was also the birthplace of McConnell’s favorite playwright, William Shakespeare. The company more than doubled its sales reps that year to 25,000 and brought in over $2 million in sales.

When McConnell died on January 20, 1937, he had built up a sales force that had grown to over 30,000. His son, David H. McConnell, Jr., took over the company for the next seven years, keeping the company’s growth steady. Due to the huge success of Avon’s product line, California Perfume Company was officially renamed Avon Products, Inc. in 1939.

During World War II, the manufacturing of cosmetics slowed down as the focus shifted to producing items for the military including insect repellent, pharmaceuticals, and paratrooper kits. Following the war, there were many more housewives looking for extra income in a way that did not interfere with family life. By the early 1950s, Avon’s sales force had nearly quadrupled. Each representative was now known as an “Avon Lady.”

The first advertisements for Avon appeared on television in 1954 including the famous slogan “Ding Dong, Avon Calling.” It was a very successful campaign that lasted through 1967, making it one of the longest and most successful in history. Avon opened offices in Venezuela and Puerto Rico that same year and also in the United Kingdom in 1957.

The direct-selling method of going door-to-door was largely responsible for their incredible sales success throughout the 1950s and ’60s when women were often found at home.

In 1963, Avon began offering jewelry to their customers but only as a gift with purchase. The jewelry quickly became very popular with their customers. Soon, there was a growing demand for the jewelry to be available as a separate purchase from the perfume and skin care products.

Avon began producing and selling costume jewelry in 1971, adding its own separate jewelry section to their catalog. Their first three pieces incorporated perfume into the designs and included an owl pin, a ring, and a pendant.

Others followed, such as this popular enamel perfume flower pin which I repurposed into a leather snap cuff: 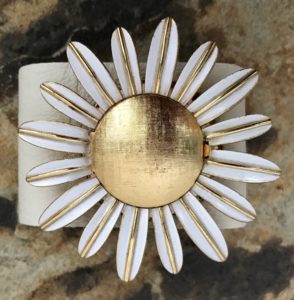 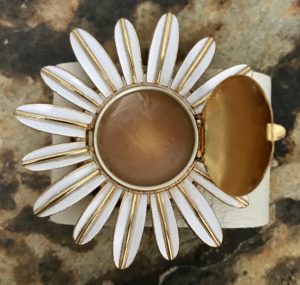 Much of Avon’s jewelry was made using plastics such as Lucite and thermoset, enamel, gold-tone metal, and rhinestones.

Here is a well-made Avon Forget-Me-Not enamel flower brooch from the 1970s which I repurposed into a necklace: 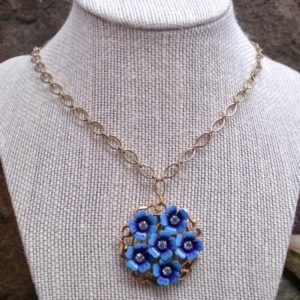 Avon was very consistent with marking all of their pieces with an Avon stamp on the back: 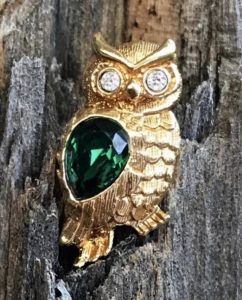 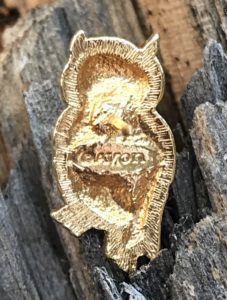 Their sales soared to $1 billion in 1972 and within five years, Avon had become the world’s largest costume jewelry manufacturer.

Success through the Storm

A recession hit in 1973 which significantly stalled Avon’s growth. By 1975, 25,000 Avon Ladies left the company as they entered the workforce in droves. Avon was then forced to restructure.

Sales reps followed women into the workplace, time in advertising was tripled, and a more contemporary image was created, all contributing to a much-needed boost in sales. By 1979, sales reached $3 billion with one million direct sales agents!

During the 1980s, Avon built a reputation for offering high quality, affordable costume jewelry. This attracted well-respected jewelry designers to contribute their ideas to the line. Avon began connecting their names and the names of celebrities with the jewelry. Kenneth Jay Lane, Elizabeth Taylor, and Jose Maria Barberra are a few of the famous names connected with Avon’s jewelry which command a higher price today.

Today, Avon brings in nearly nine billion dollars in annual revenue with products that are sold through six million independent sales reps in over 100 countries.

As a little girl in the ’70s, I had no idea how much those tiny perfume samples that I dearly loved to receive from the lady with the basket contributed to Avon’s enormous success story. 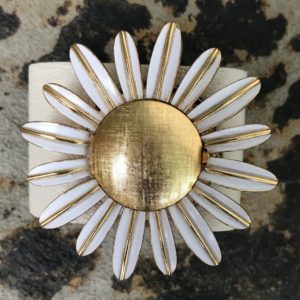