It was the weekend of one of my favorite antique shows in Dallas – one that brought dealers from near and far, all over the U.S. to set up their booths and display their collection of beautiful, sparkly vintage jewelry for people like me to drool over and, if really lucky, bring a little of it home with them, too.

As I was slowly walking around taking everything in, I heard a woman trying to get my attention from her booth. I turned around and she motioned for me to come see her display in a tall, glass case filled to the brim with sparkle. She explained that it all dated back to the early 1800s. It was so alluring! She then asked if I would like her to take some of the paste jewelry out of the case so I could get a better look.

The last time I heard the word “paste” I was in kindergarten. We used it to make paper crafts and it had absolutely nothing to do with jewelry. I was certain I had not heard the woman correctly, so I asked her to repeat herself. I had heard right, but I still had no clue what it was.

If vintage costume jewelry sparkled, I had always thought the sparkle came from rhinestones. Centuries ago, rhinestones had not even been invented. So where did this sparkle come from?

During the Georgian era, a period in British history from 1714 to 1830 during which the first four British monarchs of the House of Hanover reigned, paste jewlery became highly fashionable.

Paste is a type of glass that emulates precious stones. Hand-cut glass was placed on a metallic foil base, giving the effect similar to the glitter of diamonds. Foiled paste was most often seen in closed-backed settings, meaning the back was covered with silver or gold to protect the foil underneath. The foils were sometimes hand-tinted to imitate the color of other precious gemstones.

Here is a paste pin from the late-1800s that was partially tinted to resemble the gemstone amethyst: 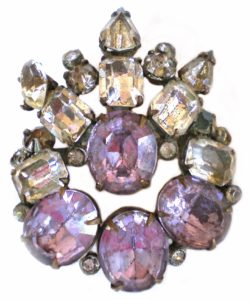 A jeweler from Strasbourg named Georg Friedrich Strass was employed in Paris in 1724 and became famous for his version of paste jewelry. He substituted the foil with a metallic powder coating which gave a mirror-like effect, reflecting back through the crystal which sparkled like a diamond when it came in contact with the light. He was so highly admired that he was appointed “Jeweler to the King.” His work was in great demand at the court of King Louis XV. To this day, many refer to fine quality antique paste jewelry as “strass.”

Another form of paste was called “black dot paste.” It had a tiny black dot painted on the culet, the flat bottom of the cut glass to mimic the open culet of early diamond cuts which often looked very dark or black. This black dot gave the illusion of depth to the stone.

The way diamonds are cut today, all of the facets come to a perfect point. In the past, the facets came together around a flat area on the bottom. Black dot paste is a distinctive characteristic of very fine paste, although not all high-quality examples of paste have painted black dots.

An Increased Demand for Paste

Brighter lighting with candles made of beeswax was introduced during the early 18th century. There was an increased number of formal social events to attend that could now take place after the sun went down. This also increased the desire for brilliant jewelry to be worn at these events.

The middle class in Europe was beginning to prosper and they wanted the same glamorous look of the elite. Diamonds, however, were somewhat scarce and extremely expensive.

Paste closely resembled diamonds and before long, its dazzle was in great demand. It was not possible to cut and polish diamonds the way we can today, so if diamonds were used, jewelry had to be created around the shapes in which they were naturally found.

Because of paste’s pliable consistency, craftsman were able to cut and polish it into whatever shapes the jewelers wanted to use. Some believe the term “paste” came from the Italian word pasta because pasta is soft, moldable, and easy to shape.

As the demand increased, glass makers aspired to match the beautiful luster of diamonds. Paste reached its height of popularity during the 18th century when there was a demand for paste jewelry as an economically reasonable substitute for diamonds and faceted gemstones. Paste jewelry also replaced finer gemstones for the wealthy when traveling so they could look their best without the fear of getting robbed by highwaymen and losing a fortune.

It was set into high-quality metals such as silver, gold, or steel, and was used in everything from ornamental shoe buckles to jeweled cuff links and decorative buttons.

Pair of woman’s shoe buckles with paste stones from England, circa 1780-1785

The Art of Paste Jewelry

Paste was considered an art form. Greater creativity could be used with paste as it was inexpensive to replace if a mistake was made in cutting. Because of the exceptionally fine workmanship, paste jewelry could be regarded as an exclusive luxury.

This made it popular with royals such as King George III and IV and other high-ranking officials. Although they could afford whatever they wanted, they loved the look of paste jewelry. Most paste came from France, England, Spain, or Portugal.

In 1830, the styles and the way paste jewelry was constructed changed due to the new industrialized production which replaced making everything by hand. Years later, there were also changes in the style of diamond cutting which was adopted to the way paste was cut. Instead of unusually-shaped stones that were characteristic of 18th-century paste, there were now uniform round stones to make it easier for using stamped or cast settings.

In 1892, Daniel Swarovski patented a machine that could manufacture faceted and polished glass stones at a high rate of speed. He moved his company to Austria, near the Rhine River, to take advantage of local hydroelectricity for the necessary high energy grinding processes. These glass stones were called  “rhinestones,”  replacing time-consuming, hand-cut paste and were used in costume jewelry for years to come.

Here is a 1950s Swarovski rhinestone pin in different shades of purple that I repurposed into an adjustable ring:

How to Care for Your Paste Jewelry

If you happen to own any paste jewelry, be sure to never get it wet, especially if it is foiled as the moisture will destroy the look of the stones. To clean, simply use a soft, dry cloth or toothbrush. Store paste jewelry separately from your other jewelry as paste is softer than gemstones and can be scratched easily.

I definitely consider myself one of the lucky ones who not only got to bring home a few sparkly, vintage treasures I found that day, but also a new appreciation for paste that I had not had since kindergarten!