Can you imagine starting a new business during the peak of a world war? Louis Kramer had that kind of imagination, along with the confidence and talent it took to make it an incredible success.

Kramer Jewelry Creations was established by Louis Kramer in New York City in the year 1943, during the height of World War II. The costume jewelry market was flourishing despite the war, so Louis’s brothers, Morris and Harry, decided to join him in his business venture.

Their jewelry was sold in every price range, from low to high, with a look from simple to extravagant. Kramer designed many of the pieces himself using high quality, clear and vibrant colored rhinestones, textured glass, faux pearls, and simulated semi-precious stones. He also incorporated the best Swarovski crystals to give his high-end jewelry magnificent sparkle which was well-suited to his clients who were drawn to luxury and glamour.

This dazzling Kramer brooch that I found on one of my vintage costume jewelry hunts is a perfect example:

During the 1950s, Kramer used gold-plate settings for “The Golden Look” as seen in this sapphire blue Kramer clip earring I repurposed into an adjustable ring:

This was followed by using silver plate through the 1960s for “The Diamond Look.” Both of these were trademarks owned by Kramer Jewelry Creations. 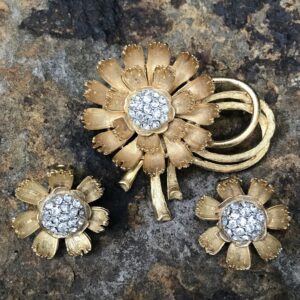 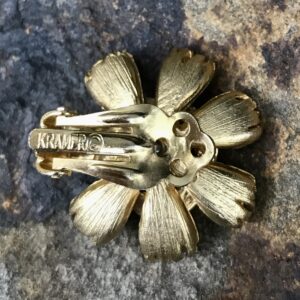 French fashion designer Christian Dior was the founder of one of the world’s finest fashion houses. He admired Kramer’s skill and artistry so much that he hired him to design jewelry for The House of Dior during the early 1950s. Only the most reputable designers were commissioned to produce pieces for Dior.

KRAMER STERLING was a mark used during World War II when sterling silver was incorporated into costume jewelry after a ban was placed on other metals that needed to be used for defense production in the military.

Kramer’s higher-end jewelry was marked KRAMER or KRAMER OF NEW YORK while the less expensive pieces were simply tagged.

KRAMER of NY was used during the 1940s and ’50s. These are considered to be Kramer’s best years for collectors. I recently found a spectacular pair of sapphire rhinestone clip earrings with this mark. They are in perfect condition and look like they were never worn!

After the late 1950s, his jewelry was marked KRAMER in an oval or triangle-shaped plaque.

Kramer Jewelry Creations ceased operations in the late 1970s. It is still a very well-respected name as it should be after such a fearless beginning during one of the greatest wars in history!