I have been wearing necklaces since I was a little girl. When I was in elementary school, I remember going to the state fair – a fun, annual family tradition. If my sister and I did not end up winning any prizes after playing every rigged balloon-popping or ball-throwing game, my empathetic, kind-hearted parents would always buy us something special before we left the fair.

It was one of those years that our luck (and Dad’s spare change) had run out. I remember stopping at a booth where my parents told my sister and me that we could pick out our very own personalized necklace.

We each chose one with a petite chain and a gold metal heart pendant with our birthstone affixed to the heart. We waited patiently while they etched our names into the necklaces. When they handed me mine, I remember the excitement I felt to have a necklace with my own name on it. I adored it and wore it often.

I still love to wear necklaces that have significance. I recently purchased this stunning book chain choker necklace that had been in a woman’s family since the 1800s: 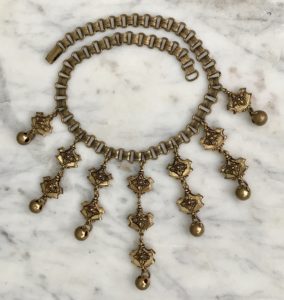 I am sure it was quite loved and admired. It had first belonged to her great, great grandmother who passed it down to her daughter, born in 1879. It definitely has some history and is incredibly beautiful, especially for being well over 100 years old!

So what exactly is a book chain? If you look closely, the design of the links are shaped like the bindings of books: 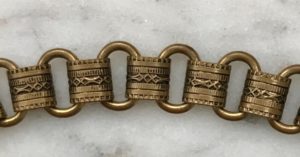 On the other side, they have folded links of flat metal:

Necklaces and bracelets were the most common forms of jewelry featuring book chain. The book chain design emerged during the latter part of the Early Victorian Era, or Romantic Period (1837 to 1860), during the time when Queen Victoria was reigning in Great Britain.

In the late 1830s and early ’40s, clothing covered the entire body. High necklines were in fashion so necklaces were rarely worn. After necklines were lowered, necklaces became more popular. 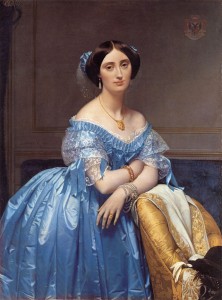 Most Victorian book chain was made out of gold, copper, brass, or gold-plated metal and was hand-assembled which was quite labor-intensive and treasured dearly if you owned one back then.

The designs of Victorian book chain were also intricately detailed, adding to the fine workmanship. Links were engraved by hand and then decorated with taille d’épargne enamel in which the engraved lines in the metal are filled in with opaque enamel.

Book chains often had a locket pendant. After the daguerreotype process was invented in 1839 to make photographic portraits, wearing a locket containing the photo of a loved one became highly fashionable. Sometimes they would also contain a lock of hair, keeping the memory of someone dear close to their heart.

In addition to being a beautiful and sometimes sentimental fashion adornment, book chain necklaces surprisingly had another purpose. When women finished reading at night, they removed their book chain from their neck and used it as a bookmark. Perhaps that is where the name “book chain” actually originated!

By the beginning of the Mid-Victorian Era, also known as the Grand Period which took place between 1860 and 1885, the Industrial Revolution was in progress, leading to jewelry becoming mass-produced. Jewelry was often stamped, a process where punch or die cuts are used on metal or gold to produce a mark or pattern as seen on these metal pieces hanging from this book chain: 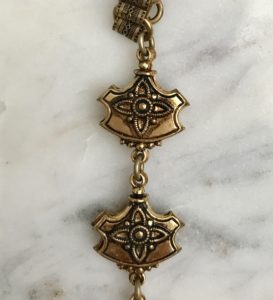 Victorian jewelry had a major revival during the Late Victorian Period (1890 – 1901). Revival jewelry became popular after it was exhibited in Paris at the second world’s fair, the International Exposition of 1867. Book chain continued to be a standard design through the Art Deco jewelry era of 1920 to 1939.

Today, antique and vintage book chain pieces are very rare and difficult to find. I may not have had a lot of luck playing those games at the state fair when I was a little girl, but I definitely got a good dose of it later in life when I found this beloved book chain necklace which I will be keeping close to my heart.