Buying costume jewelry in the 1950s must have been rather difficult when it came to making a decision about what to buy. There were many choices with so much of it well made and incredibly beautiful! An abundance of vibrant, striking colors of rhinestones was available and used during this era for necklaces, earrings, brooches, and bracelets.

One particular company that often used an assortment of colors in their jewelry was the Hollywood Jewelry Manufacturing Company of New York City. It was founded in 1936 by Joseph Chorbajian who was an Armenian immigrant. His two cousins, Jack Hazard and Arshag “Archie” Chorbajian, joined him in 1939.

The Hollywood Jewelry Manufacturing Company changed their name to Hollycraft in 1948, perhaps due to customer confusion with jewelry produced by Joseff of Hollywood, the top designer for on-screen jewelry during the 1930s and ’40s, otherwise known as the Golden Age of Hollywood.

The hang tags they used that year had HOLLYCRAFT printed on one side and CREATED BY HOLLYWOOD JEWELRY MFG. NEW YORK on the reverse.

Beginning in 1950, Hollycraft was one of the few companies that marked dates on its pieces to make the jewelry easier to identify. This continued throughout the 1950s. A copyright symbol was added after 1955: 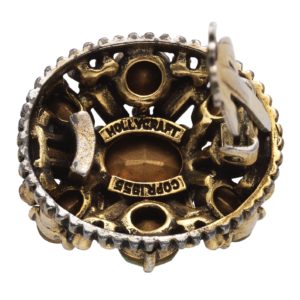 Hollycraft became a leader in the creation of costume jewelry from the 1950s. Their designs were sold to jobbers who were responsible for the production and distribution of the pieces. In addition to selling under their own name, Hollycraft also manufactured for several other companies such as Weiss and Pakula.

Once you recognize the Hollycraft look, it is pretty easy to pick out the pieces they made for other companies when you spot them. The signature look of Hollycraft is a combination of rich, pastel-colored rhinestones of different shapes with plenty of sparkle.

Some of their most popular designs from the 1950s are those using multi-colored stones including amethyst, aqua, citrine, pink, and olivine pastel hues. Hollycraft also used colors not commonly found in costume jewelry such as lime green: 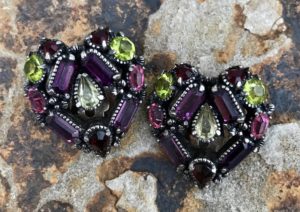 Here is a set of Hollycraft multi-colored pastel rhinestone clip earrings. They have a faux alexandrite stone in the center which can look either lavender or blue, depending on the lighting: 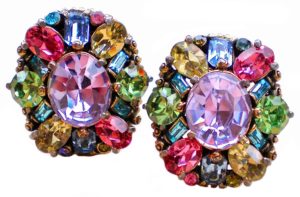 Now and then, Hollycraft would only use one color, but most often, their jewelry was made with a variety of colors. Settings were usually in a gold tone metal or a burnished antiqued gold tone: 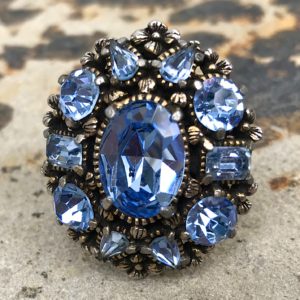 Matching sets of jewelry were very popular in the 1950s and early ’60s. Hollycraft produced complete sets, also known as parures which included a necklace, earrings, bracelet, brooch, and sometimes a ring. Parures are more difficult to find as pieces get lost, damaged, or separated from the others in the set over the years.

In the early 1970s, Joseff Chorbajian sold Hollycraft. Manufacturing ceased sometime during the late ’70s. Hollycraft’s high quality, exquisite craftsmanship, and stunning pastel colors drew people to it years ago and it continues to be in high demand by collectors today. 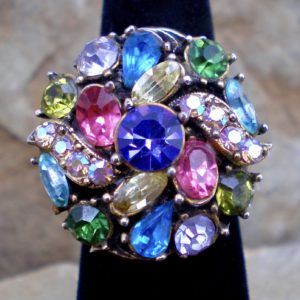